Over the world, armed conflict continues to be characterized by high levels of civilian deaths, injury, displacement, psychological trauma and sexual violence. Alongside such widespread protection risks, we also know that particular groups shoulder disproportionate burdens – children living through conflict for instance are at risk of being separated from their families, recruited into armed groups and denied an education. 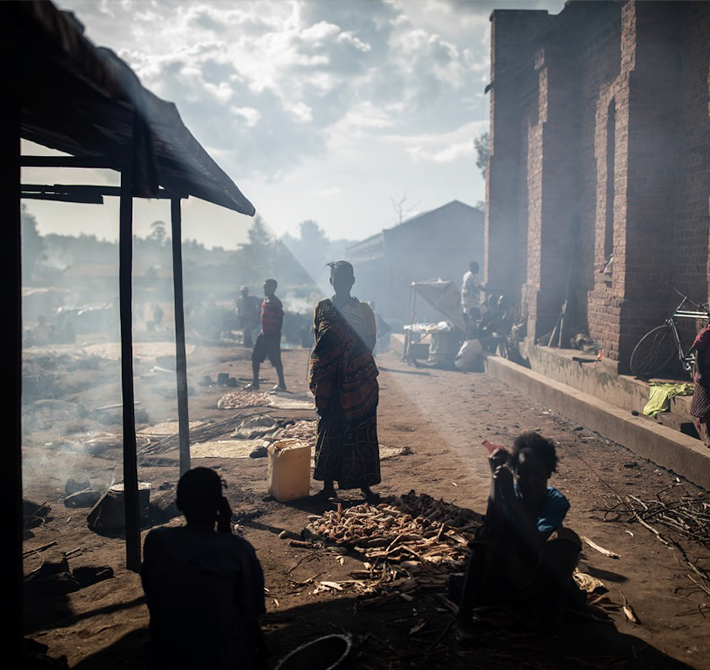 During the second quarter of 2022

In Central African Republic, 6,576 GBV incidents have been recorded in the 2nd quarter of 2022, in the most affected areas by armed conflict and food insecurity, representing an overly concerning steep increase compared to the end of 2021. In the region of North Kivu (DRC), GBV violations perpetrated by armed groups are observed on a daily basis, with Beni and Lubero territories registering 60% of all cases. At country level, an increase of cases targeting IDPs has been registered since June 2022. In Mali, forced marriages, rape, physical violence at water and wood collection points are on a worrying rise. In Ethiopia, extreme and catastrophic GBV levels are recorded at the border of Amhara and Afar regions and in all zones in Tigray region (1,300 incidents of rape recorded). IDPs frequently report GBV cases, especially in sites where shelter conditions are below standard and availability of and access to services are challenging. 110 women were murdered in Honduras in the first four months of 2022, a 6.8% increase compared to the same period of 2021.

In Somalia, the worsening drought conditions are interrelated with increasing GBV, manifested by a rise in recorded rape (14% of GBV cases compared to 12%) and intimate partner violence (60% compared to 51%) between the second and first quarter of 2022. In the Far North of Cameroon, the insecurity and displacement have aggravated an environment where discriminatory socio-cultural norms against women and girls are widespread, and basic social services limited. The number of rapes increased during the past three months. In the NWSW, the persistent insecurity has caused displacement of population, with rising numbers in GBV incidents. In South Sudan, 52% of marriages are either children getting married, or children being forced to marry. 213 cases of conflict related sexual violence and other forms of GBV were also recorded throughout the period.

Impediments or restrictions to freedom of movement, siege and forced displacement

As of September 2022, a total of 1.4M individuals were displaced across Somalia due to drought (66%) and conflict and insecurity (34%). In DRC, IDPs are increasingly victims of murders, injuries, and rape by parties to the conflict during pendular movements between their areas of origin and their fields, pushed by insufficient humanitarian aid and the need to harvest. Increasing large-scale mass arrest campaigns and forced expulsions of non-Libyans are taking place in Zwara, Tripoli and Sebha urban areas in Libya, raising self-imposed restrictions on movements. Armed groups’ lack of respect of the principle of distinction is causing recurrent preventive and forced displacement in Mali. The freedom of movement of civilian population in Myanmar is increasingly curtailed by movement and presence of armed actors, number of checkpoints, curfews, and identity checks across the country. In the first 6 months of 2022, around 327 incidents involving Israeli settlers, the seizing or demolition of 312 structures with consequent 15,130 people affected by forced evictions, have been raising the risk of forced displacement in the West Bank of oPt. Insecurity and violence remain pervasive and affect the freedom of movement of civilians in the NW and SW regions of Cameroon in addition to the weekly ghost towns and regular lockdowns imposed by non-state armed groups. Civilians also self-restrict their movements, especially in areas of checkpoints, as they lack civil documentation.

In Ethiopia about 3,200 fatalities were recorded since the beginning of 2022. Civilians are deliberately targeted or caught in the hostilities among armed groups and Government forces, and ethnic violence, both in Northern Ethiopia and in other regions, like Oromia, Benishangul Gumuz and Gambella. Since May 2022, there has been an increase in civilian casualties in DRC because of the use of artillery and the direct targeting of civilians during fighting between M23 and FARDC. In Myanmar, reported protection incidents during the second quarter of 2022 suggest that, at least 349 civilians have lost their lives due to conflict-related violence, either due to indiscriminate or targeted attacks. From 1 January to 15 September 2022, the Armed Conflict Location and Event Data Project (ACLED) recorded in Somalia 2,031 events of violence against civilians resulting in 3,217 deaths. Generalised and increased threats against indigenous leaders in Bolivar state in Venezuela was reported since June 2022. Airstrikes, shelling, armed clashes, and explosive ordnance incidents have continued to cause death and injury, displacement, damage to property, and destruction of civilian infrastructure in Syria. Attacks to health facilities continue unabated in CAR with a total of 19 attacks since the beginning of the year, in the prefectures of Ouham, Basse Kotto, Ouham-Pende and Bamingui- Bangoran. Attacks against education remain severe in the NWSW crisis in Cameroon including attacks against school infrastructures or lockdown imposed for 10 days to prevent the return to school. Protection monitors also report occupation and attacks against health centers and hospitals.

A disturbing increase in the number of xenophobic incidents targeting foreigners, specifically with anti-migrant and anti-refugee statements were documented and observed in various locations in Libya. The latest escalations in Gaza and West Bank of the oPt have furtherly declined the chronic and unabated mental health of Palestinian population, suffering already from one of the highest burdens in Eastern Mediterranean region (54% boys and 47% girls show mental health disorder). In Somalia, the almost non-existing mental health services (0.5 psychiatric beds/100.000, compared to 6.4 in East Mediterranean and 24 globally) coupled with insecurity, conflict, poverty, drought, and COVID-19 pandemic compounding factors are pushing to a worrying increase of the prevalence of mental-health conditions.

Presence of mines and other explosive ordnance

In Afghanistan there are still 4,104 hazardous areas affecting at least 1,522 communities. Around 1 million people is affected by mine and explosive ordnance in Burkina Faso, where 10 out of 13 regions registered an elevated number of incidents. Approximately one in three communities in Syria is estimated to be contaminated by explosives posing significant risks to civilians and humanitarian actors and a major obstacle to early recovery efforts. 185 casualties from landmine/ERW explosions have been registered in Myanmar (65% of the total registered in 2021), and 39 incidents (affecting 127 people) in CAR, with the highest number of cases in the prefectures of Ouham-Pende, Nana-Membere, Ouaka and Mambere Kadei. As of May 2022, 60 square kilometres of minefields, 77 suspected hazardous areas and 19 battle areas have been recorded in Somalia, with civilian population accounting for 50% of the total number of 422 casualties registered. Assessments are ongoing after the August 2022 violent escalation in Gaza of the oPt, which have increased the presence of mines and explosive ordnance. In Venezuela, 12 explosive devices were deactivated in the sector La Capilla in the Arauca axis, approximately five kilometres East of the town of La Victoria, in municipality Paez of Apure state.

A total of 854 cases of extortions have been registered in the four regions of Niger as of August 2022. IDPs in Burkina Faso are constantly losing their houses and lands in the place of origin, with few opportunities to find shelter and land in areas of arrival. Continuous attacks in villages and looting in areas left by displaced population is increasing the violation and abuse of property rights in DRC. In Honduras, merchants, small business owners and public transport drivers, in urban settings, often face persecution and life threats related to extortion. In an environment of increased mass evictions, theft and extortion of belongings affect frequently migrants and refugees, when passing checkpoints in Libya. Extortion remains a widespread protection risk in Myanmar and has become a means of exploitation, in particular across the Rakhine and Chin states. During the second quarter of 2022, extortion represent 23% of the reported incidents and impacted 46% of the total number of victims, especially in IDPs camps and checkpoints. In Somalia, during the period of January – September 2022, the HLP AoR recorded a total of 109,461 forced evictions, 84% of which occurred in Banadir region. In Mogadishu alone, the humanitarian sector has lost $2,196,500 in infrastructure and investments because of forced evictions. In the Far North and NWSW crisis of Cameroon, attacks by the non-state armed groups as well as criminal gangs systematically resulted in theft and destruction of personal properties including houses and livestock.

Impediments or restrictions to freedom of movement, siege and forced displacement

In Syria, an estimated 60% of communities face risks related to documentation, land tenure and property, and almost 80% face impediments related to loss or lack of documentation. Seeking justice remains a major challenge in Libya for all the population, due to interference of armed groups and barriers for using the statutory legal system, with no option to regularize status of persons who entered irregularly, neither any due process for persons detained due to their irregular status. Access to justice for IDPs, women, adolescent girls, and minority groups is particularly challenging and heightens protection risks in Somalia. In Afghanistan, use of punishments such as public shaming, arbitrary arrests, torture, and public executions have been reported across several province while the de facto authorities are slowly re-establishing a formal justice system. In the Far North region of Cameroon, lack of civil documentation remains endemic due forced displacement. In September 2022, almost 48% of children registered in primary grade 3 were unable to sit their exams because of a lack of birth registration documents. In the NWSW crisis, civil documentation was lost or destroyed during the attacks on villages or during flight; and civil registration centers have been abandoned in the most insecure areas. In August 2022, some 87,000 birth certificates were blocked due to the lack of civil documentation registers.